I was recently at a library where I picked up an interesting looking little book, before flicking through it. 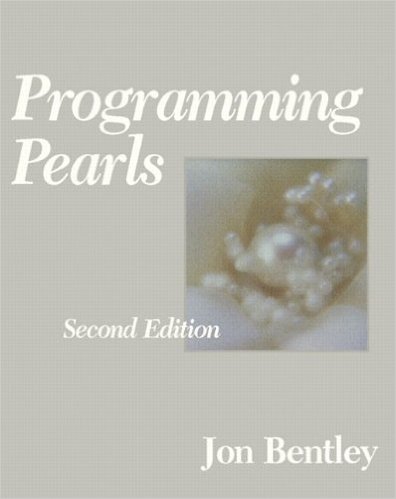 Intriguingly named Programming Pearls (by Jon Bentley), it was something I had been looking out for for a while, but was pleasantly surprised to find this inside. Yes that’s my thumb (copyright Stephen Moon, 2015). 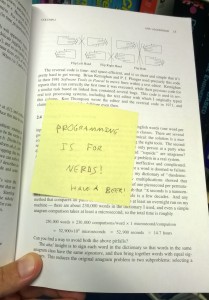 However, what made me smile (beyond the message: Programming is for Nerds! Have a beer!) is that it reminded me of the famous Post Secret site where people share their secrets. I guess that itself isn’t that common but what some do is to also hide them in books (usually of the same name) for others to read. Was this message in the same vein? A desperate plea to save a nerd? Who did this? Why? How? I had to know more.

Let’s start with where I was - the library at Birkbeck University, in London. You can’t have one without the other, so I am going to group these two together. According to the website, the university is:

…a world-class research and teaching institution, a vibrant centre of academic excellence and London‘s only specialist provider of evening higher education.

So this person probably lives in or near London, most likely has a job and wants to improve themselves. Also, entering the library is via an electronic gate - you can’t just walk right into these high-quality establishments you know :-). So, they must have had special permission/authorisation. Hold on. Maybe it’s just the partner of someone like that that sneakily slipped the note in when the other person took the book home? My logical brain just can’t help considering all options. I don’t know, though. I need to dig deeper, but for now, I’m going to go with the hypothesis that the person that wrote this is a student.

Helpfully, I can make some educated guesses about those students because the university publishes some of their statistics. Pulling out the most common demographics, in 2012/13, most students were:

I think I am drawing closer to the culprit.

So where exactly was this book? The computing section is on the first floor and to visit any other section on that floor, you have to pass by the IT books. I can’t imagine a computing student writing that, so what other subjects can you access from there? Actually all of them! There are stairs leading off from there that can reach the other floors. This isn’t going to help.

The book is quite a good choice. Of course it has the word programming in the title, as does the note, but it’s actually a particularly well known book for people that like to really think about programming. In actual fact, the book comes from a series of articles that were published in the Communications of the ACM - a well-known and read journal. As for plaudits, it has many, but one I recognised was Steve McConnell (author of Code Complete - another well respected book) who described it as:

…one of the most influential books I read early in my career.

And it’s audience (if you didn’t guess!) is best summed up by the author in the preface:

This book is written for programmers.

So there you have it. A message for programming nerds written in a book for programmers. Good choice.

I think there is quite a bit we can glean from this note. Let’s take it piece by piece.

The paper it is written on is a post-it note. These are very common in businesses which fits right in with the idea that this person has a job…but…they are also useful for studying when you want to remember your place in a text. Keep digging.

I have rotated the image below and as you can see, this person did not write the note with the paper in the correct orientation - it is slightly angled. 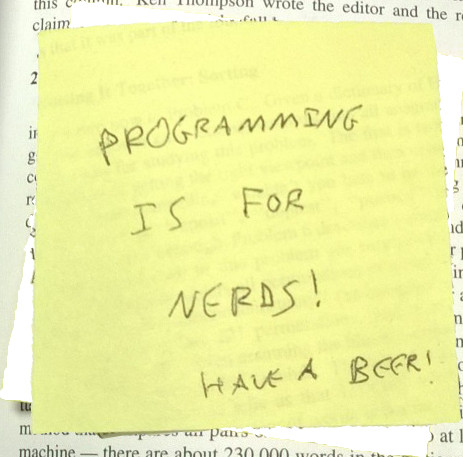 That makes me think that the person did not own the post-it. Perhaps it was someone else’s and they reached across the table? Possibly they are just sloppy? I know a computer scientist would have taken the time to align the bottom edge of the note with the table and centrally aligned the text, for correctness ;-). Again, it is unlikely to be someone like that.

I’d need to send the note off for analysis but I would say that this was written in black biro. Without the resources to take this further, I can’t narrow it down much further than that, which is a shame. Even if I did, though, unless it was an unusual pen, it wouldn’t help me find them.

The writing is quite scratchy which matches that of many people that make heavy use of computers. Writing with a pen is a skill and it can degrade through lack of use. What about writing in capital letters? That’s not exactly grammatically correct, I guess, but I am not sure it means anything. You could also think about the position of the words: 1 (PROGRAMMING), 2 (IS FOR), 1 (NERDS!), 3 (HAVE A BEER!). Not particularly well thought out in terms of layout, but again, without more specialist advice, my attempts to interpret this are going to be amateurish. I’m hesitant to embarrass myself.

The note was located on page 15, of chapter 2. So, quite early on in the book. Was that so it would be discovered soon? Was it a computer science student that felt like giving up early into reading? Does the fact that it is covering up the sub-heading: “Getting It Together: Sorting“, mean anything? So many things to consider.

I am not sure I am really all that closer to finding my author, but here’s what I have come up with for my mystery person (taking a few gentle leaps of faith): I think it is a female, arts student, studying for an undergraduate degree, that should have spent more time practising her handwriting when younger. She thinks computer scientists should/may only drink beer (incorrect!) to relax, but doesn’t plan or consider her actions (given the sloppy writing or nature of the note).

I’d guess she’s spontaneous and has a good sense of humour but lacks a proper understanding of the type of person that studies this subject. Lastly, I’d posit that she likes to dip into people’s minds and make them think - could philosophy be her thing? All in all, she sounds like someone that would be fun to hang out with but her room in the student halls is probably a mess. Now that I have reached the end of my investigation into nowhere, it’s left me wondering more about myself. I’ve reached two conclusions that you may have realised much earlier:

One last thing: Did you write that note? Send me an email - we need to have a beer.