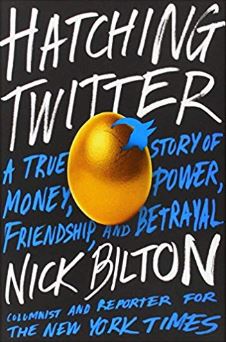 Hatching Twitter by Nick Bilton, isn’t a new book, but it has definitely been on my list of things to read for some while now. I first heard about it on the Startups for the Rest of Us podcast, featuring Rob Waller and Mike Taber on episode 161 back in December of 2013, but it was first published in November of that year.

Can’t wait and want the low-down in one sentence? It’s a great story with lots of back-stabbing and CEO musical-chairs!

So what did I think? In short, I really enjoyed it. The author, a well-known journalist, has done a great job of weaving what reads like a novel around the events of Twitter’s early days. He describes how it began as a startup called Odeo run by Noah Glass, and through a friendship with Evan Williams (and the money he made from Blogger), grew before being cast aside for a new idea: Twitter. This was borne out of many of the original founder’s ideas, but was morphed into a new reality by Jack Dorsey who, fashioning himself as Steve Jobs, rewrote history to claim full credit…at least according to the book.

The CEOs came and went: Noah, Jack, Ev, Dick Costolo and back to Jack. It’s incredible to imagine the turmoil and constant flux that must have gone on there, with all the corporate knife wielding that went with it.

Other than that, an aspect I really enjoyed reading about was how in the beginning, it ran on Noah’s laptop. Also, the servers would routinely go down and sometimes, at really inopportune moments such as when the Russian president Dmitry Medvedev was visiting. Or how they had to build a server just for Oprah Winfrey so that when she sent her first tweet, it would work, irrespective of whatever else was happening in the Twitter world and her many followers.

It’s also interesting reading about all the celebrities that would show up and one anecdote talks about how Snoop Dogg came with his crew and ended up using the DJ decks in the canteen with Twitter employees dancing on tables in a haze of marijuana smoke!

One last thought for Noah. He sounded like somewhat of a whirlwind but despite being there from the beginning, was pushed out like the others, and without the stock in Twitter to show for it, which seems a huge shame.

At 302 pages, it’s a decent size, and one worth picking up - hardbacks are currently selling for £2.02 on Amazon - a bargain!