Another book I recently finished (quickly because I liked it) was Team Geek by Brian Fitzpatrick and Ben Collins-Sussman, published by those giants, O’Reilly. 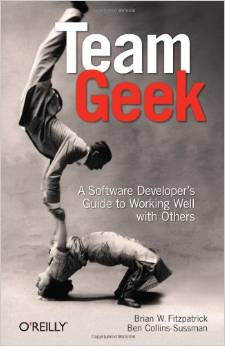 The book (at 194 pages), is split into 6 chapters which cover topics such as genius programmers, team culture, running teams and dealing with what they call poisonous people, amongst other things. However, if I had to sum up the whole book in one sentence, I’d say it was all about people: being a good person, working with colleagues well and treating your customers/users properly. In short: doing the right thing.

That last phrase is something I have carried around with me for years, ever since I first came across a game theory book called Do The Right Thing. The contents were quite mathematical but that idea (the notion), really stuck with me and helped me to consider my actions and choices in the light of the bigger picture, I guess.

Anyway, the basic premise of the book hinges around what the authors label: HRT which stand for humility, respect and trust. Through lots of examples from their working lives, they demonstrate how these three principles can really help you to be more productive and successful and through your actions, help others to be too, to create a harmonious existence. As ever, there are lots of good bits in the book such as:

“Fire you?” responds the CEO, incredulously. “Why would I fire you? I just spent $10 million training you!”

To be honest, I put sticky notes all over this book, there were that many good points and ideas. Overall, I think what makes this book so relevant is that the authors clearly have been there and done it and much of their ethos ought to resonate with any reasonable person. It’s a buy.