I was listening to a podcast today featuring Troy Hunt on Dot Net Rocks where he talked about how he had once written a question on Stack Overflow about what people thought made a good password encryption method. One of the ideas he received was, unbelievably, to use ROT-13 on the pass phrase.

I also watched another great video on Pluralsight by Deborah Kurata (called Object Oriented Programming in C#) in which, briefly, she talked about using extension methods.

You guessed it. The stars aligned and I suddenly realised that what the world needed was a quick tutorial on how to combine the two!

Before we take another step, we’d better make sure you understand what is meant by ROT-13.

ROT13 is a shortened form for “rotate by 13” and in simple terms, means that for each alphabetic character in a text string, you replace it by the letter 13 places further along in the alphabet from it. Should you pass the letter ‘Z’, you go back to ‘A’. That means all letter ‘A’s become ‘M’s and all ‘M’s become ‘A’s.

Still not clear? Let’s take a small example. If I wanted to use this on the word “HELLO”, this is what I would end up with: HELLO -> URYYB Count along on your fingers from ‘H’ 13 places and you will get the letter ‘U’. ‘E’ becomes ‘R’, the two ‘L’s are made into ‘Y’ and because ‘O’ plus 13 characters goes past the letter ‘Z’, it wraps back around to ‘B’.

For a small splash of history, you might be interested to know that it is also known as a Caesar Cipher because he actually used it for his personal correspondence. There you go!

Even today, it is popular on bulletin boards to hide spoilers or another place you can see it used is on the Geocaching website (geocaching.com) where it hides the hints about where to find caches. Note: It should not be used to encrypt passwords, of course!

What Exactly Are Extension Methods?

An extension method in C# is a way to add functionality to existing classes without rewriting the class or recompiling it. Why is that quite cool? Well, let’s think about what we would need to do to create this kind of function using other methods. One way we could do it would be to create a helper class and add it as a member function. It might look like this:

That’s a bit pointless though because we don’t need any state to be maintained in the helper and means that we would need an instance object, each time. Instead, why not try creating a static class like so:

That’s an improvement because now we can do things like: Helper.Rot13(...). But, wouldn’t it be so much nicer if we could add a member function to the String class because:

How Do We Create An Extension Method?

Actually, in the static class example above, we were really close to finishing the extension method. There is one last thing you need to do and that is to add the keyword: this to the parameter list:

Look closely. Can you see it? That’s it! Really, it is. In this case, we’ve added an extension method to the STRING class, but you can just as easily add one to any other class. Just replace STRING with the class you want to add to (e.g. int, Customer, CheekyLittleClassName; it’s up to you).

This is how we could use the function:

Plus, when we look at intellisense for the string, we have this fantastic addition: 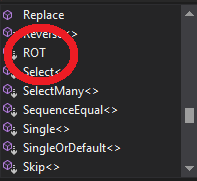 Back to our ROT-13 task. I will show you two ways that you might implement this and then I will discuss the one that I favour and why. Take a quick look at this ASCII chart though because it is integral to understanding how those letters are represented in memory (note: I am ignoring UTF etc. for simplicity).

Note that I pass in a numeric value. That’s so that we have a bit more flexibility over how much we rotate the characters allowing us to do more than ROT-13. The basic algorithm is:

Let’s zoom in on how we bring the values back into range (that is, if the result zipped past the letter Z). I’ll use the uppercase letters for my example:

This method uses a lookup string and relies on the fact that no matter where I start, should I add on 26 (a number I don’t even want to go as high as), I will at most run through all the letters again. By adding in the lowercase letters too, I can handle both sets of letters (upper and lower). To begin, I ask if the character is a letter and if it is, I find it in my lookup string (charSet), add on the amount to increment and use that as my result.

Just for completeness, let’s add some defensive coding in to prevent any undesirable arguments. The value to increment the letters by would be pointless if it were zero (no change) and negative values aren’t in it’s remit. Equally, using 26 would just rotate the character back to it’s original position and anything higher makes no sense. I also wanted to make sure that the input had something at least to work with, but that wouldn’t stop strings like "[193" being passed in. They won’t cause any problems but it would be a little waste of time. One final look at how to use the (new) function, with a numeric argument:

I prefer the lookup string because it is much easier to understand. I don’t think there is any real performance hit on using it and the extra memory required is negligible. What do you think? Hopefully this has enlightened you about extension methods and if not, well, “V GEVRQ”.