One thing that I think differentiates someone who uses Visual Studio a lot from someone that doesn’t is whether they are familiar with the key strokes and short-cuts available to speed up typing. One of my favourite features is something called snippets which allows you to use pre-canned chunks of code using very simple code words to trigger them. For example, if I type “_cw_” and press tab twice in a C# source file, it will add the following line into the code:

With the cursor placed conveniently between the brackets.

What Snippets are Available?

Many! Let’s takea look at some:

Under the Language Combo Box, choose “_C Sharp_” since that’s a good place to start. All being well, you will see the following: 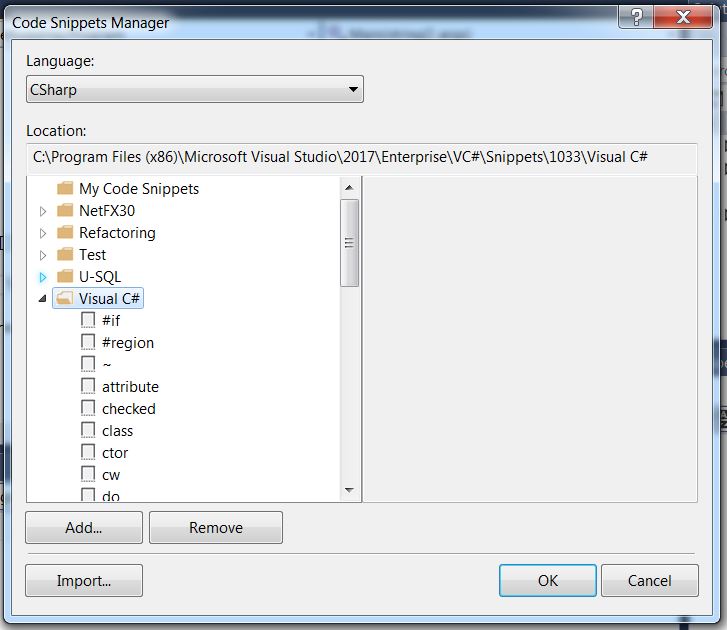 You can see that I have expanded the Visual C# tree item but if you click on one of the examples, on the right it will tell you about that particular snippet works. Let’s take a look at “while_” - under _Snippet Type it offers Expansions and Surrounds With but what does all that mean? In Visual Studio, find a place within a method and type the following:

Hopefully you won’t be too shocked to see the following, with the cursor highlighting the text “true”:

You can now replace anything you pressed with what was there (true). OK. Quite handy, but that doesn’t much look like it has surrounded anything. Try this now:

Pretty nice, right? As you can see in the tree list there are many, many more, so just experiment with a few and see which ones you will use most.