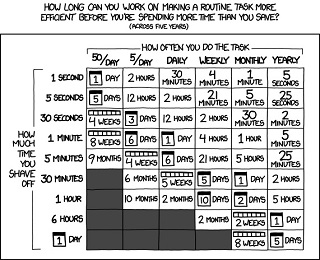 I recently saw this on Cory Zue’s blog and having just completed a small PowerShell script which would remove a whole load of mundane clicking and typing, it got me thinking as to whether I had done the right thing in automating the task. TLDR - yep!

I thought it might be useful to explain it a little for those that look at such things and get a brain freeze - I know I did for the first couple of minutes.

In short, the basic idea is that you may not want to automate anything that will take you longer to build, than it would to do it manually. E.g. if it takes you an hour to automate a task, but over 5 years it only saves you 5 seconds, then that’s a very bad trade-off and you may want to consider not bothering to do it.

Let’s take a closer look at the table, though. Based on a 5 year time-span, you can see that the top row has labels for how often you do something, ranging from 50 times a day to once a year.

The rows indicate how much time you would save, each time you used the automation, and go from 1 second right up to 1 day.

To interpret it however, you need to see where those two columns intersect. Let’s use a specific example and it will become much clearer. 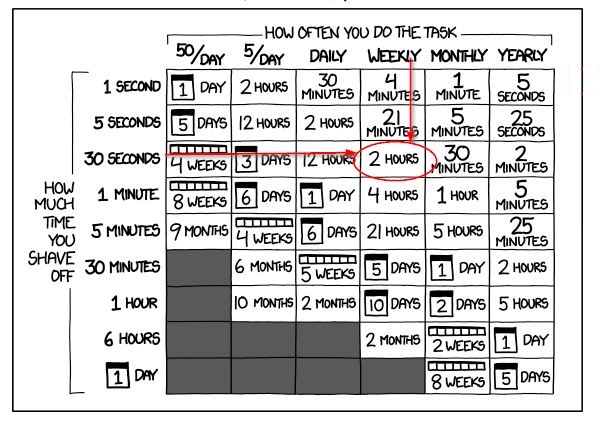 In the example above, the scenario is that you do something once a week (the column), over 5 years. Each time you automate it, it saves you 30 seconds in time (the row). Therefore, over 5 years, that would add up to 2 hours of time saved (the intersection, circled).

You might be wondering what the greyed out boxes mean? They are impossible situations. If for example you do something 50 times a day, there is no way that you could save 30 minutes, because that would amount to more hours in a day than actually exist.

I want to revisit my PowerShell automation that I mentioned above. I think that would have taken me about 2 hours to do manually the first time and then 5 minutes subsequently each month (I don’t purchase that many ebooks); I have to guess because luckily for me, I didn’t actually do it. On that basis, provided I could automate it in less than 2 hours but definitely in less than 5, it was probably worth it, not least because I was able to write a blog post about it.

How do your automated task plans stack up? Let me know.