Right now it feels like there are 97,000 things I need to know, so I thought it was time to pick up 97 Things Every Programmer Should Know (Edited by Kevlin Henney) and see if what it held could help me along my path. 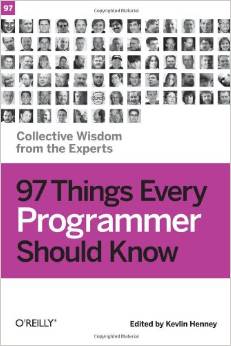 A quick flick through the list of contributors threw up some names that I already knew, like:

However, I am sure that if I were better read, many of the others would be just as familiar. Anyway, onto the book.

There are about 229 pages but to be honest, probably only about 194 (97x2) of them are actual contributions since most seem to span a couple of pages, and those pages aren’t fully filled. That’s OK though because it makes this an easy read to pick up and put down as you like. In my case, I skim read all of the book apart from the contributions that were applicable to me or meant something poignant, so bear that in mind as you read this; I didn’t thoroughly read everything!

My first impressions were that it was going to be a dry book because some of the topics didn’t resonate with me, some of the writing was really formal and parts quite onerous to read. To be fair, many of the people that submitted items to this book probably don’t have English as their first language so it’s worth giving some consideration in respect of that. I am glad I persevered though because there are some gems in here. Perhaps not brand new insights for everyone, but at least useful reminders that don’t hurt to be repeated every now and then. It’s some of those that I want to share next.

Overall then, how do I feel about the book? There are some brilliant entries within it but it does feel that you have to brush some soil away to get to the really good stuff. Definitely worth a read but perhaps borrow it from the library before buying to ensure it’s your kind of thing?