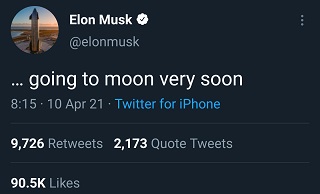 This made me smile the other day, so I decided to take a screenshot of the tweet and keep it for posterity.

Most know, of course, that Elon Musk is behind Space X and they are planning all sorts of inter-planetary exploits, so there is nothing that strange there. I know what he really meant, too: that he/they are heading to the big rock in the sky - the Moon.

However, what people from England know (and possibly some other countries, I’m not sure), is that “to moon“ has another, less polite, meaning. I’ll refrain from actually defining it in my post, but if you are interested, you can learn more about it here.

That reminded me of another story which involved a lecturer of mine from university who said he had entered an ACM (Association of Computing Machinery’s) coding competition many years earlier in America. According to him, they didn’t succeed because they stumbled over various cultural misunderstandings that hampered their progress in solving the tasks. He never actually said what they were, but looking back, I can believe it.

More recently, I was reviewing a pre-release entrepreneurial book and came across other examples of writing that had the same issue. It is a great book, but phrases and terms were used, quite naturally by the author, that just didn’t make sense to me simply because they were uncommon in my country. I’m trying to remember what they were (there were a few) but I think one was the term agency, and it was being used in sentences like: “so-and-so had agency“. I’m still not 100% sure what it meant and I am a native English speaker.

So what’s my point?

Firstly, it’s hard - really hard - to cater for a world-wide English speaking audience. This is especially so when some of your readers have English as a second language.

Then what about shared understanding and common experiences as we grow up? I have a colleague at work who is a similar age to me and we often refer to things we saw as children, relating them to current events, and know exactly what we mean without any further explanation. Another example of that was when I talked about something happening in “our house“ and how it was a very “special house“, to someone of a younger generation. Mean anything to you? It would if you grew up listening to Madness!

Religion. Country of birth. Language. Experiences. Gender…and more. They all shape and change what we are and therefore ought to be borne in mind when communicating and sharing knowledge.

This is just me shooting some hot-air and I don’t have any earth-shattering answers to any of this. Moreover, I’m as guilty as the next person of doing it, but hopefully in future I’ll try harder to:

[1] I think I already made an assumption!